Anne Farrell at Currents 2015: The Anti-Gravity of The Island of Pal

Today in these United States of Insanity, we grieve, we mourn, we shriek with the rage of the powerless, and the luckiest of us turn to Art for solace, for refuge, for healing, for momentary escape from the pain.

In Anne Farrell's The Island of Pal little red skiffs float on undulating waters, but so do armchairs, fully made beds, and spiraling severed horses' heads in the throbbing air. Three toy horses are posed on synthetic turf in a theatrically raked trapezoidal corral bordered by tiny rope footlights. No bridles or saddles are ever in view; these are wild horses temporarily and ever-so-lightly penned in by a white picket fence. Enclosed inside the skewed geometry and oblique angles the equine visitors—a palomino named Pal, a buckskin called Bonnie, and her sometimes partner, the black-coated Clyde—are here to entice playmates. 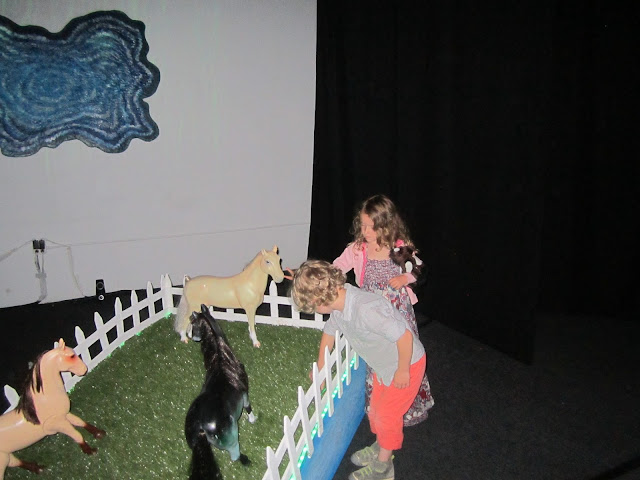 A Plexiglas case contains two 3-D printed plastic spoons, one long and white, one short and black, each fancifully decorated with a frilly wide bow, suggestive of extravagant gifts and luxurious party dresses. Despite their differences in size and color, these spoons—emblems of the acts of feeding, digging, music-making—cohere; a second case protects a single small boat devoid of either passengers or cargo, its red and black paint painstakingly applied to appear weathered, and by inference, traveled. But how, with no oars or engine or agent, human or otherwise, aboard? 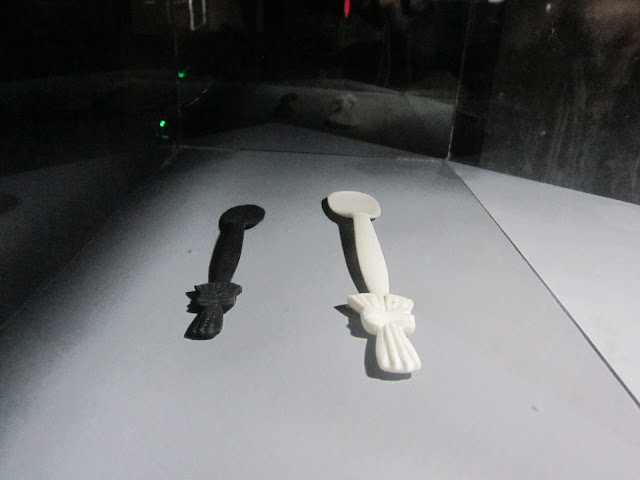 Projected on the far wall are two separate animated images, picture window size. On the left is an island in the distinct form of a leaf, and a pond in the shape of a giant amoeba in which renderings of magnified corpuscular cells pulse on the surface like fibrillating lotus blossoms. These projections of leaf island and amoeba pond, which foreground the rippling, writhing  instability of both land and water, help attune us to Farrell's primary preoccupation in this work—the shape of things. In all meanings: the particular external forms of her objects, but also their condition, what shape are they in? What is their fitness for continued existence and what will be the quality of that existence in a world where lands are gobbled for development, water is poisoned by industrial polluters, and beautiful wild things go tragically extinct, daily. 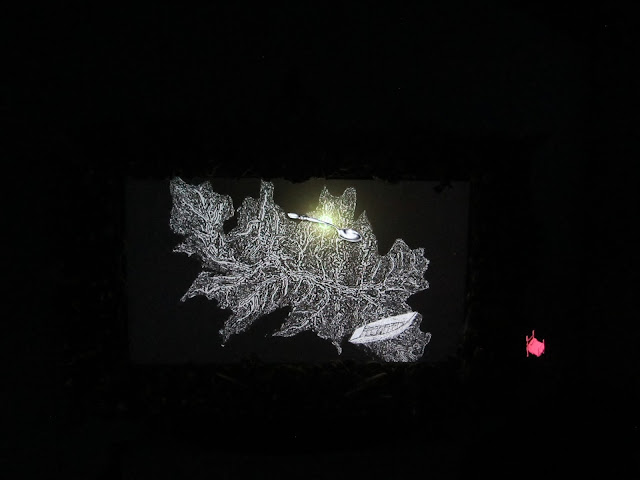 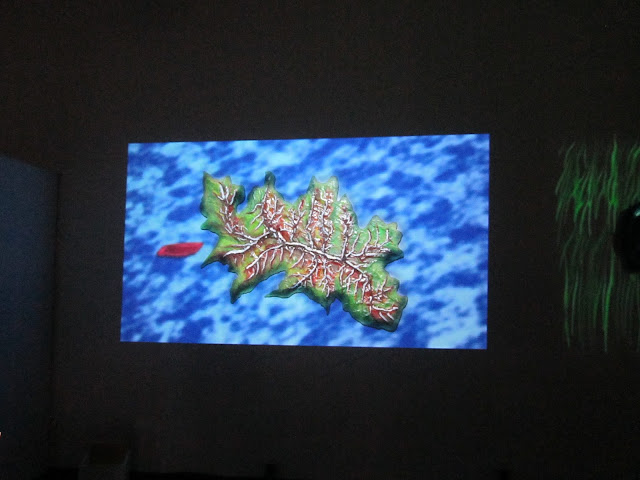 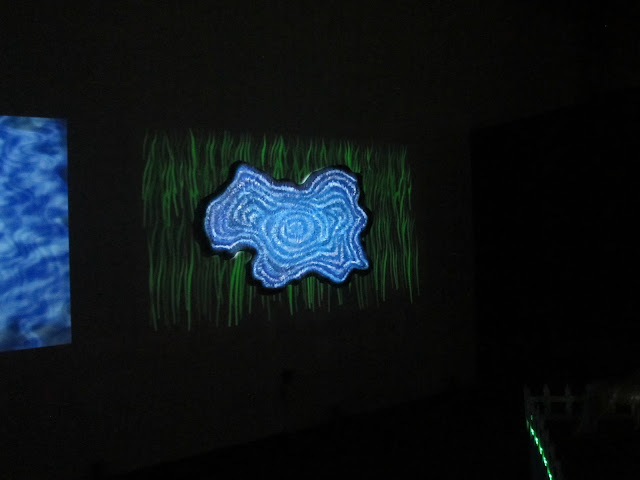 Farrell terms them “maps,” but hers is no ordinary cartography, at least the directions are not cardinal points on a magnetized compass, and the landmarks are referenced by her quotidian spoons and beds and chairs and skiffs. We might call hers an "onto-cartography" in that what she's mapping is being itself. Why would Farrell even attempt new maps, even symbological ones, if not to urge the need for, and possibility of, a reorientation? Maps are invitations, future forward ones; they move us onward, if only in our imaginations. Discovering the depth of the realms being sounded and charted by Anne Farrell, or at least trying to, is but part of the joy of engaging with The Island of Pal. 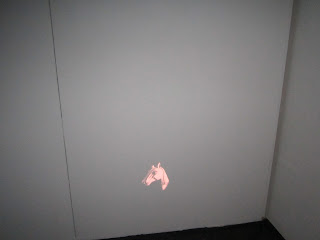 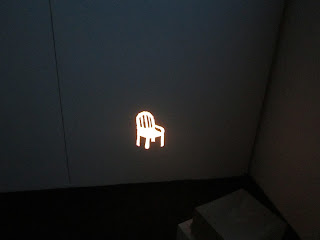 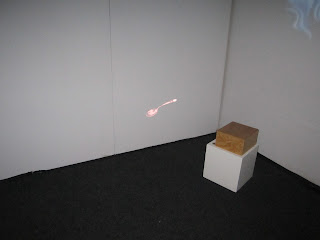 On the installation's side wall near the floor, its lowly placement a curiosity in and of itself, diminutive images of certain selected elements are projected in a slow and steady slide show. The lilliputian display reminds us to read the objects qua objects, absent their environments. Here we can let all of our uncensored associations froth to the surface—charms in a board game, Van Gogh's Bedroom in Arles, Kandinsky's psycho-spiritual canvasses, the horse's head in The Godfather, coinage of fallen empires, and so on. We're also cornered into a consideration of dimensionality, as we share space simultaneously with the artifacts themselves and their various pixelated visual representations. Transformation too is in the mix—spoons were once pixels (before they were read and 3-D printed) and become pixels again in the digital animation. 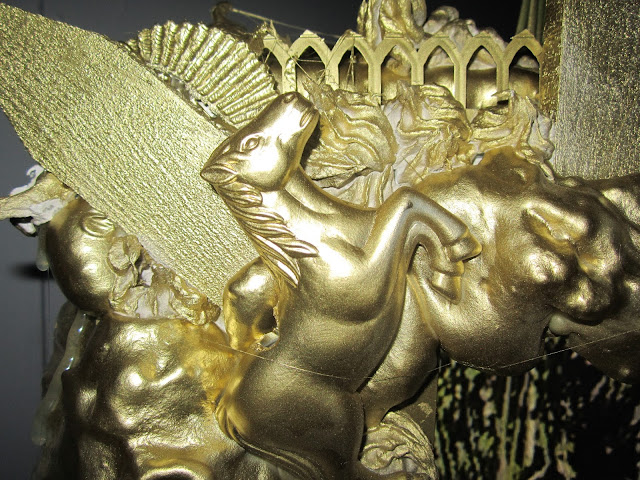 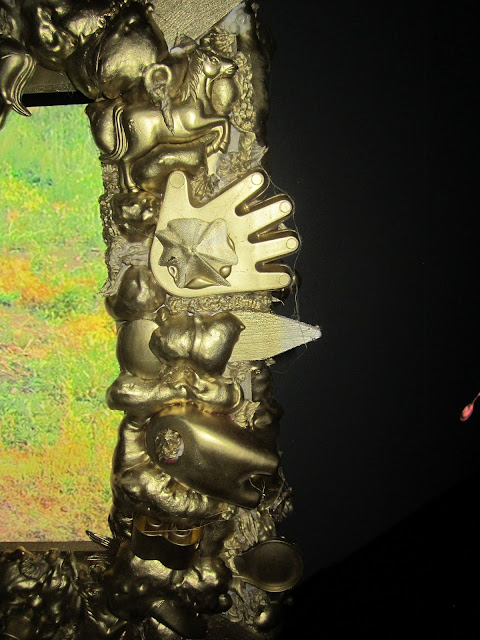 Inside a bricolage gilt frame is a screen upon which a ten-minute video containing all of these disparate constituents (and new characters too) is played in a loop. Also called The Island of Pal, the video is a dream narrative of Pal, Bonnie, and Clyde (neo-mythical names for fantastical beings) delighting in an idyll of grasslands and wildflowers. The animation makes no attempt to be lifelike. While the horses' plush tails do swish, their legs don't bend; they don't gallop so much as absurdly hop all four legs at once from point to point, or they hurtle through space without touching down at all. 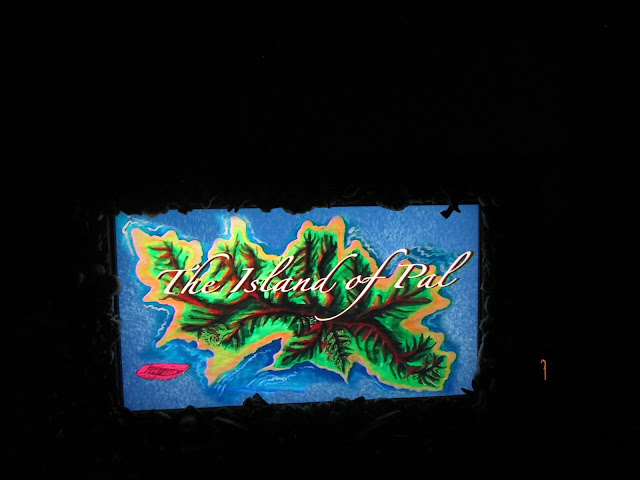 The video has its own soundtrack filled with the ringing tones of chimes and plinking, tinkling bells, accessible by headphones. One comes to feel that this music is generated from our host Pal's own imagination as he frolics and flies about the landscape, striking notes and chords all beautifully pleasing to his toy horse ears. Decorative flourishes like cascading stars and dancing curlicues stir the atmosphere into a climactic vortex, but without any sense of menace or negative consequence in the controlled chaos of creation. A gleaming metallic robotic mannequin sits on a boulder contemplating the marvelous "natural" setting, peaceably co-existing with all beings—parasites and pollinators, alike; at first the robot is bare, but then covers itself in a diagonally-striped tigerish mini-dress. Amongst a deluge of falling leaves, it departs, its “spirit” stirred and refreshed, ready to hit the dance floor.

Posted by Frances Madeson at 11:38 AM