Give Efrén Paredes Back His Natural Life 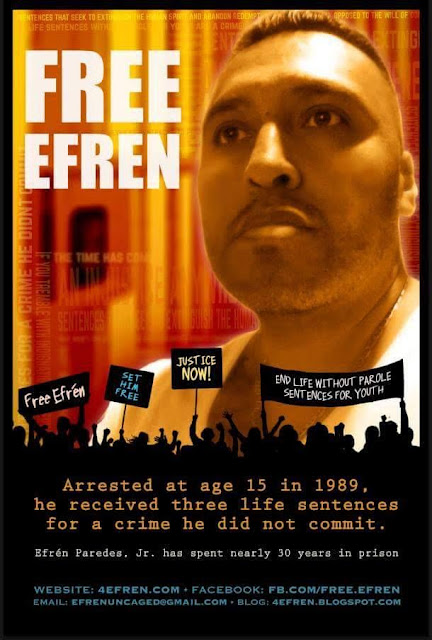 When Efrén Paredes Jr. was only 15 years old, he was dropped down the rabbit hole of injustice in Michigan--the first teen there to be sentenced automatically to Juvenile Life Without Possibility of Parole known as JLWOP. Even the acronym elides possibility.

Next week on July 28 a federal judge in Michigan will rule on his own temporary restraining order entered into earlier this month that disallowed the continued use of JLWOP. There’s every likelihood that having come so far he will in fact make the restraining order permanent. I reached out to Efrén, who is one of the five prisoners featured in Natural Life, a film by Israeli documentary maker Tirtza Even, recently shown as part of the Experimental Documentary Series curated by Paul Marcus at the Currents New Media Festival in Santa Fe. Efrén was also recently named in Latina Magazine as one of four Latinos deserving clemency right now.

In the movie we're told that Efrén was already home when the manager at the restaurant where he worked was murdered, in fact the manager had driven him home. His whole family consistently and ardently swears it—they ate pizza, the tv was on, he said goodnight, they all went to sleep. There is a Facebook page that describes his ongoing efforts for liberation, which is how I originally contacted him.

After a brief correspondence I've now spoken with Efrén, who was able to phone me from the Richard A. Handlon Correctional Facility on a prepaid debit card.

I asked him for his thoughts about US District Court Judge John O’Meara’s temporary restraining order.

A step in the right direction; I believe that it’s long overdue. Almost two dozen states have said the JLWOP sentence is unconstitutional; 192 foreign countries have said the same thing. I’m hoping for a nationwide ban by the U.S. Supreme Court within the next two years.

What about your feelings?

I think that I felt…I was…feeling very, really good about the decision. Everyone deals with things differently. For me, I’m cautiously optimistic. I’m very reserved, because it’s been a roller coaster ride. I’ve been waiting for victory, waiting a long time. It’s emotionally taxing, very difficult. Four years ago with Miller v. Alabama, that should have ended it. So it’s difficult to get excited. But I  definitely had a good feeling, and my family had a good feeling too.

When you first saw the completed film, what did you make of your words appearing at the bottom of a blackened screen?

That was Tirtza’s artistic perspective, rather than just show a face frozen in a photograph. For many years we’ve been silenced and our voices have not been heard, so this film is an opportunity to talk about our human rights violations. The blackened screen represents that we’ve been silenced, not seen. We’ve been viewed as a surplus population. One that’s expendable.

In the film, your former high school teacher confesses on screen that she experienced societal pressure to self-censor, and was silent while you were transformed in public perception overnight from the hard-working honors student that you were to a murderous monster of the media’s making.

It’s not surprising. At the time I didn’t understand it the way I understand it now. I was the first juvenile to fall under the automatic waiver provision. I was sent to adult court, without a juvenile hearing. Previous to JLWOP, a kid in my position would’ve been sent to juvenile court for a hearing, and then if necessary to adult court. I went straight to the county jail,15 years old, I was the youngest person in the jail, possibly to this day the youngest ever to be incarcerated in that jail.

It was heartbreaking that she couldn’t tell the truth. But to be honest it’s still difficult to get the facts out in certain communities. Where I was arrested is 97% white; everyone involved was white—the arresting officers, the prosecutors, judge and jury. The younger people involved pled guilty and received 6 months in a juvenile facility. One was not charged at all. The two Asian-Americans who pled guilty got 18-45 year sentences for murder and robbery. I was the youngest person, with the darkest skin, and received the most punitive sentence of all.

So it’s in that context that I now understand the self-censorship; the place was plagued with a pervasive racism. The treatment of people of color has been outrageous. All of the juvenile lifers from my county were of color. All of them.

I understand from your wife that you’ve recently been transferred to a new prison. Can you tell us what that’s like—if it’s any kind of improvement?

I’ve been transferred to a number of facilities over the years; it’s stressful to adjust to a new population, to lose friends, acquaintances of almost 30 years. I just left a guy who was with me when I was first a prisoner in 1989; we shared six months in the last facility. We reconnected; those separations are difficult to deal with. The ties you make in prison, they become part of your family, they see you more than your own family. Those relations…the separation can cause anxiety, bouts of depression. You’re not known.

And you’re not given notice, it’s just one day they tell you to pack up and you’re transported somewhere new.

Do you dare to dream about being released, about living with your wife and three daughters as a free man, husband and father?

I plan for that every day, I work for that every single day. I strive to educate myself, and to continue to evolve and grow as a person. I always hope to use my stewardship, my place among peers, to be the light for others. I plan on speaking out in the free world to at-risk youth, to mentor them, to encourage literacy, and show them how to stay out of trouble, which could have a profound effect on the rest of their lives. My dream is to help our youth especially to deescalate racial tensions. Of course I long to reunite with my family, be productive. Is it possible? I hope so.

I urge people to contact their legislators in the 28 states that have not yet banned JLWOP. I ask people to do that, to make JLWOP unacceptable in a civilized society, in a nation that speaks to other nations about children's rights. JLOWP is diametrically opposed to that.

A call, a letter would be helpful.

Posted by Frances Madeson at 10:02 AM